Tongue ties have been in use since the eighteenth century but the practice has only come under scrutiny in recent years. In the past decade, researchers have begun publishing studies about tongue-tying and public awareness of this aversive implement has spread rapidly. 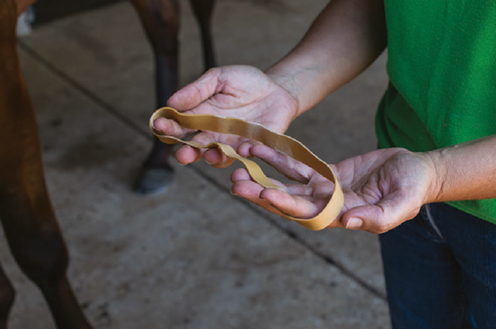 What are tongue ties?

Nylon stockings, leather straps or elastic bands (most common) are looped around the base of the horse’s tongue and then tied around the lower jaw. Some trainers pull the tongue forward and sideways out of the mouth when tying.

Why and how are they used?

The immobilisation of a horse’s tongue is practised in the racing industry to prevent the horse from working their tongue back and over the bit. The principal reasons used are:

N.B. This is an UNREGULATED practice. The trainers decide how tightly to tie the tongue and how long it remains tied. Ties are generally applied before leaving the stable and are reportedly left on for up to twenty minutes during racing and thirty minutes during training. There is NO veterinarian input either BEFORE or AFTER use.

How widespread is this practice in Australian racing?

*The use of tongue ties is recorded. Statistics have been sourced from racing industry data.3

What does science say about tongue ties?

There is very limited data available but studies done in recent years are bringing evidence to racing industry professionals and the general public.

Complicated subjects such as animal welfare can raise strong feelings and beliefs on both sides of a debate so it is important that the whole body of work be assessed, and that studies are shown to be repeatable and reputable.

Studies in support of the use of tongue ties1

1) Published in the Equine Veterinary Journal, a 2013 study by Heather J Chalmers examined the effect of tongue ties on internal structures of the upper airway with a new ultrasound technique.
Results:
a) Suggested that the use of ties positioned structures more compatibly with upper airway stability. However:
i. Horses were tested only in resting position so the effects of high-level exercise were not considered.
ii. No stress measurements were taken.
Despite these omissions, Chalmers claimed that the ties did ‘not seem to bother the horses’.1 In a further comment, she suggested that use of the ties might represent improvement in the area of safety.

2) Chalmers’ work appears to support a 2009 retrospective study by Barakzai et al., also published in the Equine Veterinary Journal, which evaluated racing performance in Thoroughbred racehorses in the U.K. via a national database.
Results:
a) There were greater odds for improvement with horses wearing the ties.
b) There was a significant increase in the earnings of tied horses.
N.B. both of these studies viewed tongue ties as performance-enhancing tools and did NOT show any concern regarding how they are used.

Studies from a different perspective1

Two studies deal with the use of tongue ties in horses diagnosed with Dorsal Displacement of the Soft Palette (DDSP):

3) Published in 2002 in the Equine Veterinary Journal Supplement, Equine Exercise Physiology, a study by Franklin et al. worked six Thoroughbred horses with confirmed DDSP on a high-intensity treadmill to test the efficacy of ties in a dynamic method akin to racing. They were monitored for gaseous exchange and by endoscopic observation of the soft palette.
Results:
a) Without the tongue ties, all six presented with DDSP.
b) With ties, four still showed displacement in the high-intensity portion of the test, and a fifth horse also presented with DDSP at the end of the test.
This demonstrates that tongue ties did NOT improve ventilation in horses still experiencing displacement.

4) A 2001 study by Cornelis et al. in the American Journal of Veterinary Research also used a high-speed treadmill with five Standardbred horses to measure airway function in healthy horses.
Results:
a) Failed to show any increase in respiratory function when the horses were tied.
b) Suggested ties MIGHT be effective for horses diagnosed with conditions such as DDSP.

5) A survey of trainers in the U.K. in 2001 by Franklin et al. reported that conservative measures of treating DDSP such as tight nosebands and tongue ties were:
a) Completely effective in 12.9% of cases.
b) Partly or temporarily effective in 42% of cases.
The study concluded that ‘in regards to respiratory performance, the available literature shows that tongue ties have a positive effect on some horses and not others, and only when DDSP is present’.1

Thankfully scientists are now doing research in this critical area, considering racing from the horses’ perspective.

6) Presented at a scientific conference in 2017 and awaiting publication in a peer-reviewed journal, a study by Latimer-Marsh tested stress responses of horses with tongue ties when at rest. It was partially designed to test a hypothesis put forward in a 2016 U.K. study by Pollock et al.1 which showed that young horses did NOT tolerate ties well and suggested a period of habituation was required.

Twelve Standardbreds were chosen to compare responses to tongue-tying with tongue manipulation (this was done for thirty seconds to mimic the application of a tie) by measuring universally accepted behavioural and physiological reactions to stress. Six horses had previous experience of ties whilst six did not. They were left for twenty minutes.
Results:
a) Those wearing ties showed significantly more frequent stress behaviours such as gaping, ears back and head tossing.
b) In the second half of the test, time spent holding ears back increased which may indicate that the longer a horse is tied, the more discomfort is felt.
c) The horses with previous experience showed more pronounced and frequent responses, directly contradicting the Pollock study.
d) Physiologically, the cortisol (stress hormone) levels were higher in the tied group, clearly indicating stress.

7) A 2016 survey of Australian trainers by Findley et al. analysed 535 responses.
Results:
a) 85% used tongue ties.
b) 78% replied that the most common reason for using them was to prevent the tongue moving over the bit.
c) Only 37% used ties when they suspected airway obstruction.
d) 23% reported complications after the use of ties, including lacerations, swelling, bruising and head shyness.
[other studies have also observed difficulty swallowing, anxiety, ‘blue tongue’ and permanent tissue damage] A last word about training horses: highly-respected scientist/trainers6  believe that horses try to get their tongue over the bit for human-caused reasons such as too much unrelenting and meaningless pressure maintained on the tongue via the bit. Learning Theory as applied to animals, in this case by using negative reinforcement, now clearly demonstrates that horses rewarded by the release of pressure as soon as they give the demanded response will learn to relax the tongue under the bit.

The world is changing under public scrutiny and Australia’s racing industry should take cognisance of two very recent events:

In summary
The Coalition for the Protection of Racehorses exists to protect and defend the lives and wellbeing of horses used by the racing industry. When considering the above information, one thing is made abundantly clear – the use of tongue ties (like horse racing overall) is in service to the human, not the horse. Even if tongue ties were proven to improve safety and respiratory function, it would only be in cases where their bodies are pushed beyond natural limits for the benefit of the industry. CPR believes that horses should not be forcefully dominated to the point that their tongues must be banded and strapped down inside their mouths, causing them stress, pain and injuries, simply for the entertainment and profit of humans.

It is time to put all horses’ lives and well-being above their earning potential.

1) Vandermark, S. and Wilkins, C. (July 2018), Tongue Ties: Trying to See the Whole Picture. Horses and People Magazine
2) Franklin, S. and McGreevy, P. (July 9, 2018), The Conversation (AU). Online: funded by the University of Adelaide and The University of Sydney
3) RSPCA (last updated: 09 July, 2018), What is the RSPCA position on the use of tongue ties in horse racing? Online: Article ID: 736
4) RSPCA (10th July 2018), RSPCA demands action to end widespread tongue tie use in horse racing. Online: Media Release
5) Lees, J. (updated June 1 2018), Tongue-ties outlawed in Germany over welfare concerns. Online: Racing Post
6) McLean, A. and Fenner, K. (May 2018), Why Does My Horse… Put His Tongue Over the Bit? Horses and People Magazine